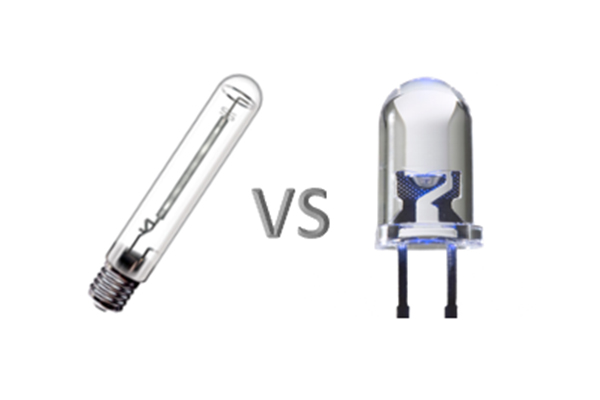 Find out which is the most efficient lighting system between high pressure sodium lamps and LED lamps.

One of the main arguments for LED lighting is that it consumes two to three times less energy than High Pressure Sodium (HPS). But there are many additional advantages: intensity, efficiency, spectrum, thermal, variation, …

In its laboratory, Vegetal Grow Development has delved into the issue to ensure advanced results and correlate them to the plant field.

This test highlights the comparison between two luminaires: the 600 Watts HPS and the latest addition to the LUMIA range: the TOP MAX LUMIA 600W LED from Vegetal Grow Development (VGD).

Looking at the results, several points should be highlighted:

For the same intensity (µmol/m²/s or lux) captured by a plant, HPS lamps consume more, are less efficient with a spectrum less optimized for photosynthesis. LED luminaires inevitably have more positive points compared to HPS lamps, but the question of price remains, where HPS lamps are still the winners. In our cities and in our homes we have passed the milestone of energy-efficient SLR and tomorrow what are we going to do for our crops?

It’s up to you to make up your mind based on the results.

Do you have any questions? Do you need more information about our trials? Request a test?

You can find out more about which cookies we are using or switch them off in settings.

This website uses cookies so that we can provide you with the best user experience possible. Cookie information is stored in your browser and performs functions such as recognising you when you return to our website and helping our team to understand which sections of the website you find most interesting and useful.

Strictly Necessary Cookie should be enabled at all times so that we can save your preferences for cookie settings.

If you disable this cookie, we will not be able to save your preferences. This means that every time you visit this website you will need to enable or disable cookies again.